my predictions are this:

i’m much happier going to bed early and getting it all over a done with than partying like a mad thing. that said, we were invited round to a neighbour’s house for a hogmany do which i quite fancied, but lack of babysitters prevented us popping out (and it would have been bad form for one of us to go and not the other).
so we sat in chatting whilst fireworks exploded around and about. we just assumed they were fireworks from all the noise. i like to think it was actually our neighbours wandering up and down with inflated crisp bags, popping them occasionally to give the impression they were having a good time and we weren’t. the loud deep explosions were obviously the kettle crisp bags
hang on to the old year i say. let’s have an old year non-party instead.

here is my mum and jane in conversation on new year’s eve. 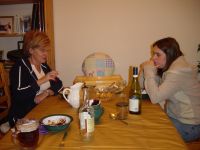 i’ve spent a fair bit of time moving davescollections over to a better/easier updatable format.
still lots of work to do. but it’s a start.
here is the most recently found photo: 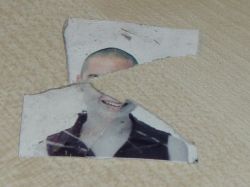 this cat aint funny no more

day 6 of the amazing hair growing cat
the fur seems to have taken on a more wirey nature. most peculiar. for the sake of variety, today’s photo is from a slightly different angle 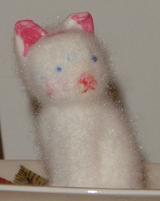 today’s been cold (but not wet) so we went for a family bike ride. kezia went in the seat on the back of my bike and esther went on the tag-a-long connected to jane’s bike.

following the classic who is brother edd ? entry of a few days back, here is a Who Is Tony ? entry.
Tony often leaves comments. He’s not Big Eye Tony. That’s a different one.
This Tony comes round to our house with his family and looks a bit like Bill Gates. tony is a man and is married to his wife and has two girls aged the same as our two. so that’s four things we have in common (note – i am married to my wife not his).
Here he is playing jane’s guitar whilst listening to The Strokes’ debut album. he hadn’t heard their music (or album) before and so what he played did not resemble the music he heard. it was in the right key however.

this tony also plays jenga (actually our poor copy version from a high street store, but some concept)

this tony is also a very good friend. to celebrate this friendship we give each other (the same) ballerina pen holder each birthday/christmas.
so there we have it. a very quick summary of tony.

day 5 of the amazing hair growing cat
once again, incremental growth is small, but significant.
tony inspects the cat:

and here’s the latest big picture (click for detail)

day 4 of the amazing hair growing cat
the growth is small, but detectable compared to yesterday

ebony and ivory. live together in perfect harmony.
two gloves, one nature reserve. one black, one white. one rubber, one leather. both lost in a strange world.

(this should prove very popular with those who like to look at damp gloves – in particular those people who end up at this site by doing a search for ‘glove wet look problem’ in google.)

save it for a rainy day

we had high hopes for today. we were going to walk around Windsor Great Park whilst Esther cycled and it was going to be great.
unfortunately it chucked it down with rain instead so we stayed in all morning. here is jane’s reaction:

in the afternoon we braved the drizzle to go to Dinton Pastures, our local nature reserve, where esther was able to cycle through muddy puddles chased by jane. 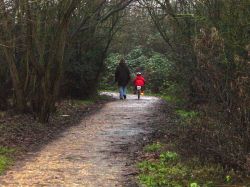 day 3 of the amazing hair growing cat
the growth continues …

this is a good time of year for family photography. here is a photo i took without flash (and long exposure) in a fisheye mirror near these christmas lights. i think the effect is quite good 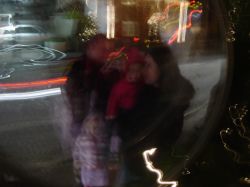 these are the last few days to catch the christmas lights. here are some in the village where we go to church. it’s just white lights which is tasteful, and all the animal shapes move which is slightly eery. 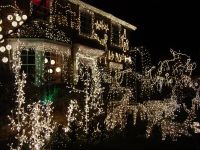 esther and kezia on a wooden horse

we went to see some friends today we haven’t seen for a number of years. we both have children that the others have never seen and those we did know as little babies are now approaching teenage years.
it was their daughter’s birthday and jane told esther it was her 9th birthday party. “oh”, said Esther, “but how old is she ?”
here is esther and kezia on a wooden rocking horse. note how kezia is standing on a beeny horse. i’m sure this is signifcant, but don’t know why. 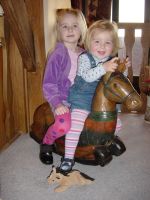 i fear for the future

my supposition is this. the world is going mad thanks to kids toys.

Read More »i fear for the future

the games of the fathers

we had a lovely time round some friends house this morning. they have children (two boys) the same age as our girls.
esther and adam loved playing on adam’s junior scaletric as the two fathers looked on, quietly itching to have a go themselves.
instead we were assigned roles of mechanics and car-replacers. a demanding job when the cars are driven by two 4 year olds who don’t understand about slowing down for corners 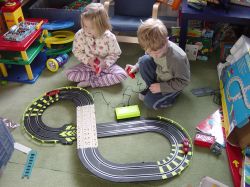 here’s a present i got from Brother Edd. It’s an amazing hair-growing cat soap.
you take it out of its packet, leave it on a plate and within 12 hours it starts to grow fur, increasing in thickness over a number of days.
here it was when i opened it last night and after 12 hours: 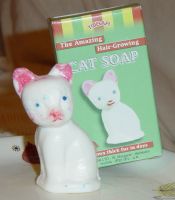 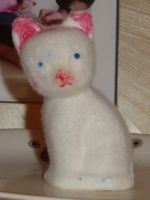 i’ll keep you updated as the fur grows. are you interested in where you can buy such an item ? do a google search

here’s a nice game you can play over the festive period. it works on the principle that when families get together there are a lot of underlying ‘issues’ which need to be dealt with.