the tragic story of the teeny weeny baby hedgehog

this looked like a heartening scene.  the teeny weeny baby hedgehog had found its mum. 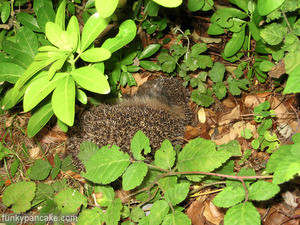 but sadly it wasn’t.  click on the title above to see the full, sad, story.

but on closer inspection (both visual and odor-y) i could tell all was
not well.  the mum was in fact dead (and maggoty) but the baby was
still trying to suckle (i assume).  very sad.

so i googled and found some information that said we needed to help
this poor little orphan piglet.  it seemed quite a daunting task as you
have to catch it, feed it mashed up cat food and goats or sheeps milk,
and then wind it like a baby by stroking its stomach.  and i thought
we’d moved on from that life stage.

so i decided to get some real world advice and phoned a lovely lady from the British Hedgehog Society
She told me i needed to catch the baby as it would surely die, and that
there may be other babies running about unacounted for.  She also
advised me to do similar things to what i found on the internet to keep
it alive until i could take it to her hedgehog hospital.

then, recognising my skill level, suggested i took it to her right
then.  that would be an hour and half’s round trip on a school night,
when i’d had the day off sick due to a stomach bug, so not ideal.

anyway, i removed mother (bagged and binned) but baby was nowhere to be
seen.  whizzed off in the undergrowth somewhere (we’ve not done any
gardening this year due to having the builders in for 6 months).  so
all very sad.  although i will at least go to bed at a reasonable hour.

oh, and i popped next door to a kind neighbour who leant me some cat food in
case the baby does turn up again.  she’s a hedgehog expert and
introduced some more scarey variables in to the surrogate sitution
including maggot eggs, fleas and ticks.