the 30 pence to spend a penny shocker

i don’t mind paying my way, although i’d rather not have to pay 20 pence to have a tinkle in paddington station.  however, my need was great, and my walk had been long so i decimated i was prepared to part with 20 pence as well as some liquid (apologies if your eating) 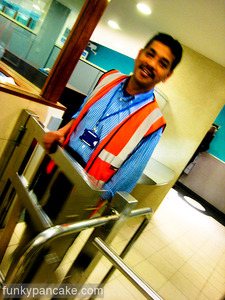 anyway, i popped my 20 pence piece in the barrier slot and it didn’t open.  bit of a shock actually as i was expecting it to open and walked in to it.  the chap above then appeared and told me the price had gone up to 30 pence.

i decided that was too much for a wee, so pressed the reject button, but my coin wasn’t returned.  i told the chap i wasn’t prepared to pay 30 pence and i wanted my 20 pence back as a matter of principle.  he said the machine wouldn’t give it back !

so we had a little stand-off with me saying “i’d like my 20 pence back please” and him saying “it’s 30 pence now, and you can’t have it back sorry”.  so i asked if i could take his photo to celebrate the difficult predicament we were in.  he kindly agreed, and gave me a smile, then we went back to politely arguing.

anyway, another customer came along and he let us both in for an additional 10 pence as consolation for the price going up and the lack of refunds.  that was kind of him, and i think was a special offer for the first day of the new pricing structure. 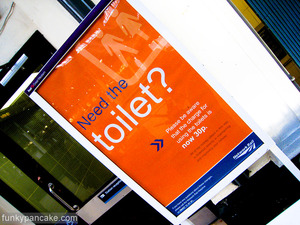 on the way out i saw the sign informing customers of the increased price.  the problem was it was too bright which resulted in urban eyes failing to spot it.

so there we are.  the story of my trip to the toilet on monday evening.  it doesn’t get better than this (and for that i can only apologise).

it’s not like anyone reads the words here anyway !