my comedy flight to warsaw

i had a good flight to warsaw (what seems like weeks ago now – in fact it was!).
at heathrow the pilot came on the intercom and said “well, we’re all on board, all the bags are loaded and we have a take off slot all confirmed, so we should be away on time. although, me saying that is usually the kiss of death. i’ll let you know if anything changes”
kiss of death !!! not what you want to hear from a pilot
a few minutes later he was back on “apologies, but one passenger has failed to turn up so we’ve got to unload his baggage. i told you it would be the kiss of death”
kiss of death !!! again !
the flight was fine, but just as we were in the last few seconds before touching down in Warsaw and everyone was in the ‘try not to look too worried’ mode, we suddenly accelerated like mad anf flew up in to the sky again. it was a bit of a shock.
apparently we had to abort our landing as a helicopter was in the way. fair enough, but a bit worrying at the time. 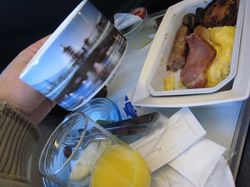