here’s a funny old celebrity spot which might be one of my favourites so far. i was walking to a meeting at a government meeting and saw labour MP Roy Hattersley walking by. i took his photo as he turned the corner. he’s here on the left. but that’s not the end of the story. oh no, my friends. 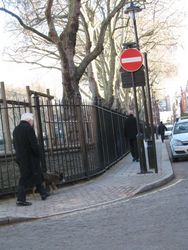 he then changed directions and he and i walked opposite to each other for the next 5 minutes or so. he was walking slower than me, but i kept stopping to take photos of signs, puddles and mattresses, so we were quite even. eventually he went in to a house.
however, even that’s not the best bit ! when i got home i googled for ‘roy hattersley dog’ to see if it really was him, and found out that the dog is nearly as famous as he is ! assuming it’s the same dog, then it might be buster in the photo (see here for more details)
i shook roy hatterley’s hand in 1992-ish when he was at a labour party rally in Sheffield. i was in disguise as an old person, so i suspect he wouldn’t have recognised me. In fact, you can read about the rally here [scroll down to the sheffield rally bit, it’s only short – i was right next to that famous central aisle sitting by some very excitable people].
i only went because it was free and i was a penniless student. this was pre-blair of course.
i’d decided to go dressed as an old man with a grey wig, a big thick polo neck jumper and a beige jacket with leather elbow patches. it was all set off with some broken national health glasses. i fitted in quite well if i remember correctly.
look how many words i wrote in this post ! this is almost like a proper blog. funny what memories come flooding back when you see an MP and his dog. (i walked past geoffrey howe last year but he didn’t have the same effect, although he did look quite sweet)