jolly chap on the tube with flowers

i had a chat with this chap who sat next to me on the tube yesterday afternoon. he’d found the flower you see here on the street and had picked them up and was taking them home.
he asked my opinion of them and we got chatting about street finds and my blog. he gave me a bit of a telling off for not picking up my finds and caring for them (“it would have been better if you had never seen them, than just take a picture and walk away – it’s like taking pictures of war victims”).
but when i showed him some of the pictures of the stuff i photograph he realised taking some of the things home would be impractical. 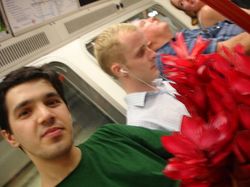 anyway, he said he might be in touch via the website and he said hoped he’d be famous by his picture appearing here. which he probably is now.
so, hello mr flower-man if you’re reading !