our friends tony and tanya helped at the party along with jane’s mum so there was a good ratio of kids to growned-ups. tony agreed to be the official moving images archivist. i remained still-image archivist and as far as possible maintained artistic control over the proceedings.
tony wasn’t that bothered about our furniture as can be seen here (he’s standing on the arm of a chair). it turned out he wasn’t too bothered about the carpet either as later he chucked a cup of tea on it.
we’ve yet to see if his footage was any good so i don’t know whether to thank him yet or not. 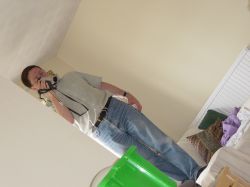 UPDATE: we watched it and it was quite amazing. especially the top of the pops 360 degrees rotation bits during the musical games.