how to avoid the congestion charge

it’s a little known fact that the congestion charge only applies to vehicles which have the driver below 10 metres from the ground. if it’s above 10 metres then you are clased as an aircraft and are exempt.
this has lead to the creation of all sorts of strange vehicles, including an attempt by London Transport to relocate their drivers upstairs in double decker buses (they abandoned this idea when they realised that they are exempt from the congestion charge anyway).
here is one such example. the driver sits in the bucket dangling on the chain on the end of the arms. 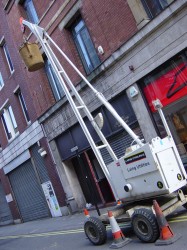