here is the church we go to (just in case you wondered what it looked like). 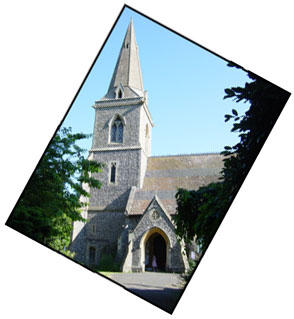 update: here’s a history of Arborfield Church from our friend lynda. she thinks there might be some inaccuracies in there but isn’t sure where.
my favourite is the vague names of the early vicars !

Records show that there was an old wooden chapel, dependent on the church of Sonning, in existence in 1226, when Arborfield was called Edburgefeld. It was rebuilt in 1256, in the reign of Henry III, of chalk and flint with a wooden tower at the West end. The Salisbury Diocesan Record stated that “the aged Priest of Edburgefeld was so blind that he could not see to read, and did not know the Canon of the Mass, nor the Gospels by heart, so was forbidden to officiate any more”. It was much later recorded that “although a good list of books and ornaments was found there, the building was described to be in a disgracefully ruinous state, and shamefully desecrated. The churchyard was over-run with cattle and uprooted by pigs”.
By 1862 the old church had fallen into such bad repair that it was thought advisable to build a new one. Sir William Brown, grandfather to Mr Hargreaves, who lived at Arborfield Hall, generously offered to build it – for the princely sum of £4,000. The old church is now in ruins, listed as “of historic interest” and can be seen in the grounds of Hall Farm.
The foundation stone of the present church of St Bartholomew’s was laid in August 1862 and the church was dedicated by Samuel Wilberforce, Bishop of Oxford, on 19 June 1863. The 13th century octagonal wooden font and part of the East window of the old church – the head of Aaron – are now in this church. The original window, probably of Flemish glass, was painted with the heads of Moses and Aaron, with the Ten Commandments underneath, but in moving the window to the new church in 1863, it was unfortunately broken and the Head of Aaron is all that remains. Some brass tablets from the old church can also be seen fixed in the walls here, the oldest of these being to the memory of Thomas Haward, who died on 4 November 1643. Tablets in memory of the Conroy family are also preserved.
In May 1927, the three new East end windows were dedicated in memory of Ellen Anne Simonds and Captain Stuart H. Rickman. They were given by John Simonds of Newlands and Mrs Stuart H. Rickman and made by Heaton, Butler and Baynes of London. In 1939, the white alabaster statues of Sir William Standon, complete with ruff and embroidered skull cap, and his wife, her thumb resting in a bible, were installed at the back of the church and at their feet, there is the figure of a child lying on its right side. There is also a marble tablet, bearing the coat of arms, in memory of Sir William’s grandson, Edward Standon. In 1946, the Tudor altar rails were restored to be used in this church.
Registers of the church date back to 1705, the older ones having been destroyed in a fire.
Rectors of Arborfield