i got a late train home this evening. i was hot and worn out from the walk from westminster so for the first time ever i bought a beer from the off license in Paddington to drink on the train like a common alcoholic. i also bought a nice bottle of cool water
however, when i got on the train and took a swig of the water it was in fact indian tonic water and disgusting.
the two people sitting next to me were having an interesting chat about belly button piercing in Leeds so i listened in to them for a bit. but then i noticed that the lady on my left had been talking for quite a while too, but there wasn’t anyone sitting next to her.
i realised that she was in fact reading her newspaper out loud (just the first paragraphs of each story). at the end of each story she’d say something like “well, that’s interesting” or “mmm. this is much better”. She was very smartly dressed and middle aged and very well spoken.
she got off in maidenhead. i took this photo after she had gone. it was very dark so i used my negative mode (instead of flashing). it suited the mood too. 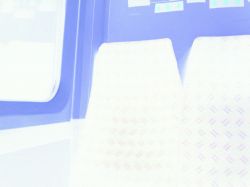