county shows are great for random chatter. the announcers feel obliged to talk non-stop for hours on end. this man told us for 10 minutes how he was about to let his bird of prey fly off in to the crowd and added “I haven’t got a clue what he’ll do as he’s not trained”.
very reassuring. 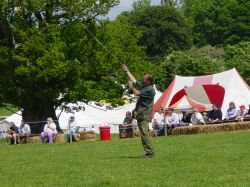 after 10 minutes of talking up the beast he let it free. it flew straight at where i was standing with the girls, narrowly missing kezia who was standing on a hay bale. it then stayed the rest of the afternoon in a tree looking at the man.
the man said “i thought that might happen” and tried to tempt it down by swinging a bit of chicken round on a rope. it didn’t work and he said “i didn’t think that would work”.
classic non-entertainment entertainment.
esther looked at me and said “i came here to see animals and entertainments, not people talking”. “fairysnuff” i said.
esther and kezia looking for the bird: 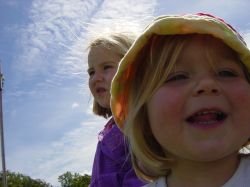 3 thoughts on “a lost bird”