remember nigel havers ? well i saw him again today. in paddington station this time. he’s my most photographed spotted celebrity. (i’ve seen Simon Pegg three times and Dennis Norden three times, but only snapped them once each). Nigel’s IMDB entry is here 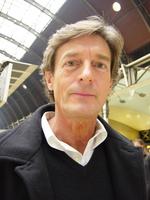 i had an interesting journey home this evening. First of all i had a comedy chap with a jovial drunk at Borough tube station. he was harmless and bonkers and i enjoyed his company.
then on my Bakerloo train two very angry and very toothless drunk people got on and started shouting in a different language at people in the carriage so i got off and waited for the next train. this proved a good plan as there was an announcement on my second train saying we were being delayed at Edgware Road because of an incident on my original train …
so i walked from Edgware Road down to Paddington and on the way found a man in a wheel chair stuck down a hole in the pavement. his electrically powered vehicle refused to propel him as he was at the wrong angle. i ended up lifting his chair (and him) down the street a bit so he was on the flat and could self power again !
finally, when i got to paddington i went to upgrade my mobile phone which said it cost £10 in the brochure but thanks to progress had now increased to £120, so i didn’t bother.
just when i thought it couldn’t get any more bizarre, along came old nigel havers

previouspage 123
nextnice weather for ducks in a row