here is a good sign. it uses the word prive instead of private to no doubt appear “down with the kids”.
but don’t even think about setting up a bike park or it’ll be removed straight away. i think skateboarding parks would probably be ok, but i’m not entirely sure.
other point to note is that it’s been nailed to the wall with cable clip things instead of nails which is a nice touch.
sometimes the sign itself says more than the sign itself. 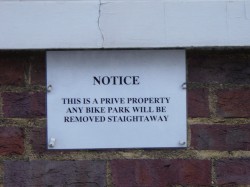