The BBC place in Portland Place (Broadcasting House) has been hidden for a while for security reasons. whilst it’s under wraps they’ve decided to put some big art displays on it. 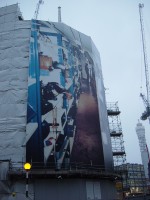 this new ‘installation’ is called Inscribing and is by William Furlong. According to the blurb on the wall, it’s a combination of sound and image and is a response to the Sound Effects store in Old Broadcasting House.
The ‘sound collage’ makes fantastic noises which can be heard a few streets away. the noises include buzzers, locks, coconut shells, kettle whistles, shoe straps (!), bells, telephones, tins and drums as used in radio dramas.
Most people walking by think it’s a burglar alarm going off. best of all is the look of despair on the workmen next door’s faces. it’s payback time for the noise they’ve all been making for the last few months.