i don’t watch TV or movies much. but occassionally i will. i’m probably way behind the times on this, but Little Britain on BBC3 is extremely excellent. it’s also about to be shown on BBC2 on Monday nights for those in the UK. 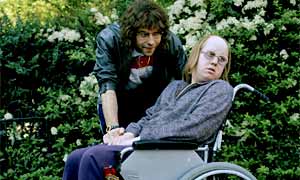 (photo from BBC website)
last night jane and i hired Being John Malkovich. it only took us 4 years to get round to watching it, but it is completely fantastic, particularly the first quarter when it’s completely random.
as for music, esther discovered she likes the Beta Band today and i rediscovered the Brian Eno’s Nervenet album.
we watched a documentary on Robert Wyatt last night and that was fantastic too.
yeah for music, tv and films.