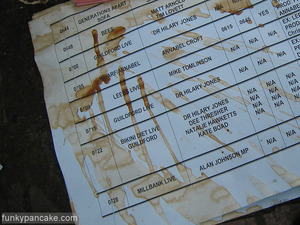 this piece of paper was lying by the GMTV studios 4 hours later when i walked back past them after my meeting.  i took a photo of it as i thought it might show The Feeling and it would go nicely with the photos of the band.

i took the photo then went on my way.  i nearly took it with me as a momento, but it was covered in coffee, and i’m no longer a 16 year old celebrity item hoarder (mostly).

imagine my surprise when i looked at the photo i took of the picture above to discovered it displayed the mobile phone number for Dr Hilary Jones, Annabel Croft and various others !  i deliberately cropped the photo so you can’t see them.

what outrageousness !  i should tell someone.  if only i had the phone number of someone who would be interested …