The B&B was called The Terrace Hotel and was on a lovely Georgian listed building in a quiet street in the centre of town. 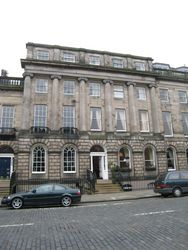 the room was huge, possibly a little shabby, but i liked that. it was also very quiet.  the ensuite was very small though and you had to climb over the loo to get in the shower.  but that’s all part of the fun. and for Â£45 a night, you can’t complain. 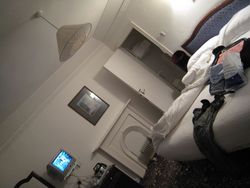 the people who run/own the hotel greeted me on arrival and they cooked the breakfast so it was all lovely and very nice.  and it’s got a great staircase (which was a bit of a climb as i was on the 3rd floor)

the next night i stayed at the jury’s inn in a refurbished room.  despite it’s recent over-haul it was still shabby – wobbly loo seat, bath that filled up slower than a slow thing, no battery cover on the remote, a lots of buttons on the telly which didn’t work.  and the ice machine in the corridor was broken. and my swipe card door key didn’t work the first time so i had to have it re-nuked.

i didn’t take a picture of the outside it seems, but it was quite dull.

In the morning the breakfast was a buffet affair which was a scrum fight due to all the coach tours staying there.  this also filled the lifts and all the landings with hundreds of huge bags.  and the staff weren’t as friendly as the b&b.  but there were less hand made signs. 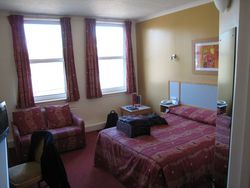 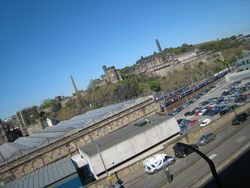 but worse still was the road with the red car on below which was cobbled and fast and therefore very noisey !  For just less than twice the cost of the B&B i wasn’t impressed. 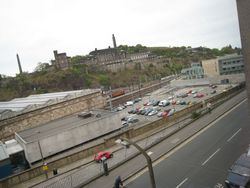 (sorry about the random bold-age – i was trying a different way of writting my blog entries but it obviously didn’t work properly ! i’ll attempt to correct later in the week)