a short trip to germany

due to my work travel agents getting things completely wrong i ended up heading for a hotel in Germany, despite having a meeting in Luxembourg tomorrow. i realised we were heading the wrong way when we went over the German border ! We then got stuck in a huge traffic jam (police doing football related checks apparently) before turning round and heading back to Luxembourg (whilst the UK travelagents were trying to find me a room in Luxembourg). 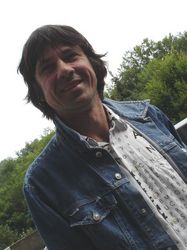 Thankfully i got my room confirmed by phone just as we arrived back in to Luxembourg and i’m now staying in the last room in Luxembourg (or something).
Here is the taxi drive who was very nice about the whole thing. i think he did best out of the whole day actually as he would have got his fare for going to Germany and back (rather than just the fare for taking me there if you see what i mean). he was very helpful though despite us not being able to communicate too well. at one point he phoned his english speaking wife just to make sure we understood what each other was saying !
i gave him the link the blog, so mr taxi-man might be reading this. if you are, hello mr taxi man !