i played bass yesterday morning for the first time in about 2 months and i think we rocked a little as we also had richard drummer and jane on her strat.
anyway, big eye tony used to complain about the drums being too loud, but he’s in a different place now. specifically that place is behind the drums having a sneaky go after the service !
during the talk about vicar suggested that the word ‘praise’ in the Bible is a bit like the modern equivalent of ‘advertise’. i thought that was very interesting and it’s made me think. Both about God and advertising ! 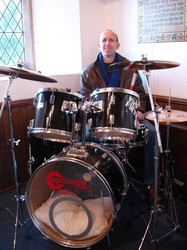