what is this i see before me ?

here is my colleague harry. he’s just spotted that the fridge has moved itself out from its usual hiding place.
fridges generally sleep during the day and harry was concerned that this one might be ill or injured as it was out in the day.
harry adopted a soothing voice and attempted to woo the fridge back in to its alcove. unfortunately he was not successful and it remained for a couple of other colleagues to man handle it back.
i’m working from home today. just to be safe. 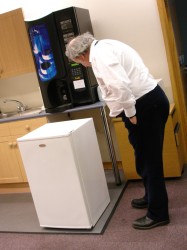