currently, it seems, children don’t slow down. but they should. as advised by this sign.
on a rare political moment yesterday i talked to someone about politics and the impending general election in the UK.
the best i could offer was that whoever gets in to power could just declare a period of national ‘chilling’ where everyone would just ‘chill’ and relax for a few years.
it would be a kind of intnational sabatical and we’ll return to the international stage beautifully refreshed after the following general election. 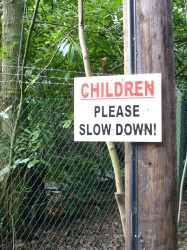