here’s your comedy stuffed animal pictures of the week. it’s from flamingo park on the Isle of Wight. They have a small display of statues and fluffy animals in a barn you can look at if it’s raining.
For some reason someone had dressed up these two flamingos on the right in sailor’s gear. even more disturbing was the dreadlocked saucy-santa wearing a festive fluffy bikini.
esther pointed out that they looked like real flamingos which had been stuffed. which they did. 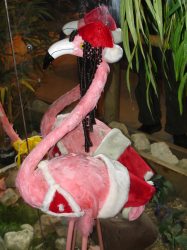 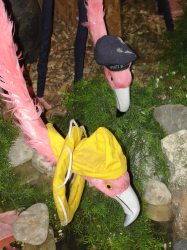