this window is covered in wet paint. perhaps it’s special invisible paint which can turn an old wall in to a window. what a great idea that would be.
i do see some drawbacks with it though. young people would go round the neighbourhood painting on people’s walls just to annoy them.
i have proposed to the makers that for privacy reasons it’s probably best that they invent a two sides version – ie when you paint on the outside wall the effect is only visible to those on the inside who can then see out. If you want to see in to a house then you’ll need to paint the inside wall.
For a window-effect as seen here, you’d need to paint both sides 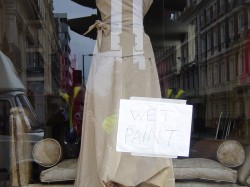 Tags:nonsense
previousQ5: something i always do
nextlondon – suitable for clowns