here’s a comedy thing. it’s two guys at either side of the road holding a piece of string between them. the string was a few centimetre off the ground a represented a significant tripping hazard.
i wondered if it was a cunning trick to make people trip over in the middle of the road (perhaps they work for the local funeral directors, or were resting paramedics).
they would have been better off doing this kind of thing on the pavement. if they had lifted the string high enough they could have knocked people’s hats off.
If they were trying to catch cars then i don’t think a piece of string is the answer. that’s like trying to catch an oil tanker with a kids fishing net. sort of. 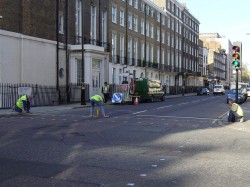