a double finder this evening. firstly i saw an abandoned jacket on my tube train so i reported it to a guard as i thought it could be considered a ‘suspect package’.
the guard wasn’t that bothered and just picked it up and swung it over his shoulder, which isn’t the best way of diffusing a potentially terrorist situation. but at least then we knew it was’t a bomb.
then, when i got to Paddington station i found these glasses on the platform. i picked them up and took them to a guard, who, guess what, wasn’t that bothered. he tried to give them back to me. i said “they’re not mine, i just found them” but he wasn’t convinces, so I ran off to get my train. 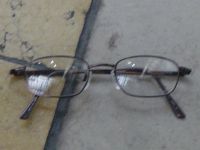