as a blueprint for life, i don’t like snakes and ladders. for some in becomes a complete allegory for the rest of their lives: 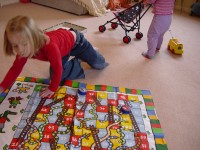 1) it’s a game of little skill unless you cheat and then the only skill is being able to cheat and get away with it
2) there’s more snakes than ladders (at this point in time – Cpt Sensible).
3) no matter how much your brighten up the board with nice pictures and colours, or even make the board as big as a carpet, it’s still the same monotonous game
4) everyone is convinced they deserve the ladders despite it being based on the role of a dice.
5) everyone get really annoyed when they go down a snake despite it being nothing personal whatsoever.
6) the outcome is based on a series of roles of the dice so there is nothing you can do but play out the already preordained order that the fickle finger of fate has already roled for you.
7) the winner always feels proud of their victory and considers themself better than the other players for winning. despite the total lack of any skill required (other than 8).
8) actually, there is some skill. you have to be able to role the dice. if you are less than 2 years old (or a few days older) you might find this concept too tricky.
7) (and this is the one that really annoyed me) if you role a 6 you get another role of the dice. why so ? the rich simply get richer. If it were fair, it would be people who rolled a 1 who should get another go.
no wonder kids grow up so disenchanted with life which they believe is stacked up against them and is predetermined so there’s no point striving for anything.
i don’t like snakes and ladders.