big eye and the big pie

i went out for pizza with Big Eye Tony last night. i opted for the chocolate cake for dessert. i was offered cream or icecream and cheekily asked for both, expecting to get a little of each.
the waitress looked at me like i was insane and worriedly hurried back to the kitchen. this was obviously one scenario she had not been covered by her training.
when it arrived, instead of two half-portions they piled extra portions of both on to the plate. hoorah ! 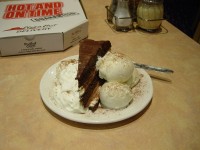