here is a strange thing under a bridge. the first we saw of it was the flashing lights. and then the thumping music. it appeared to be some workmen chancers fixing a light with their van stereo on.
or was it a new mobile disco concept ? they drive round with cherry pickers with flashing lights on top and stop in dark places (like under a tunnel). For £5 they’ll lift you up in the basket and play dance music at you for half an hour.
Ideal for the office worker who can’t get out to discoteques in the evening because of commuting commitments but still would love to dance their funky stuff.
and also, since there is only space for one person in the basket, there’s less likely to be any inappropriate flirtery. 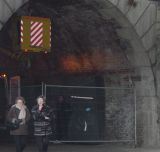