remember this ? well it’s now been nicely converted in to lots of luxury houses. they have a ‘show house’, which is an old bungalow next to the nice new houses.
so you look round the bungalow and say “it’s very nice, but there is no upstairs” and the salesman say “well, if i can find you a house with an upstairs would you buy it” and you reply “well, yes” and the salesman says “well you are in luck as i’ve loads next door”
i took this picture at 9.30pm when the bungalow was definately not open. if you can’t trust them to erect an accurate sign, can you trust them to erect a house ? probably. different things aren’t they. 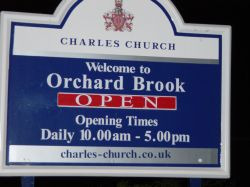 the site used to contain a chicken slaughterhouse and the close nearly got named abbatoir close or slaughter crescent or something. i once saw offal on the street opposite from one of the chicken lorries. “offal way” would be a nice road name