i was wondering why my part of berlin was so quiet. there didn’t seem to be many people about for sure. i thought berlin was meant to be party-central. i had a feeling something was going on somewhere else and i wasn’t invited (probably for my anti-freedom of speech leanings or something).
however, it was because they were all over in the old West side of the city having a street party and doing shopping and eating at brand named takeaway restaurants.
this is how they must have felt in east-berlin before the wall came down. but it was probably worse for them. i suspect. 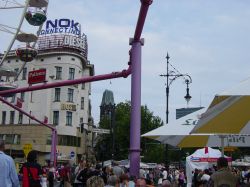