here is the top of the reichstag. i arrived at 7.30am to avoid a two hour queue. it worked very well. my queuing lasted 30 minutes (ie until the door opened at 8am). If i had arrived at 8am then my queue would have lasted no minutes as they let everyone in when the doors opened. very early Sunday morning is the time to go. 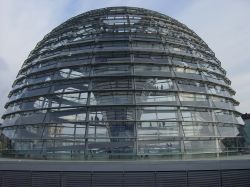 i caused trouble with the security people because i stepped forward when i shouldn’t have despite being told in incomprehensible German what to do (i assume). i then forgot i had some spare batteries in my pocket and the more he quizzed me the more confused i got and it was all very stressful. i made it through in the end though.
later that day this experience would be repeated at Berlin Airport where i even had to take my shoes off and have them put through the machine. i used to look like a hippy, but these days i obviously look more like a terrorist.