the street of london are paved with gold. everyone knows that. as a result they need polishing. here is one such device. left in the street.
i guess the idea is that people walking to work can buff a little on the way then leave it for the next person walking that way to do a bit more. eventually the most travelling walking routes get the most buffing.
or is it a congestion charge avoidance device ? Floor buffers don’t seem to be exempt according to the BBC however.
or it could be one of those new Segway things 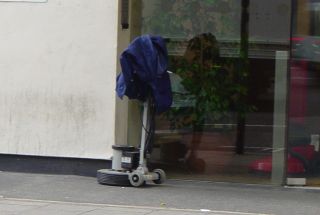