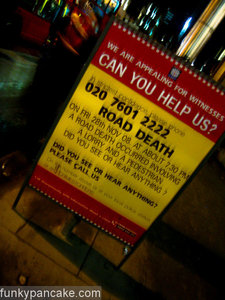 these signs are so sad 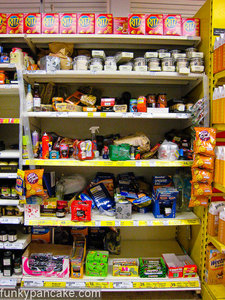 i’m always looking for a bargain so i like to have a little nose round the reduced to clear items in the supermarket.  it was particularly full yesterday, and despite some tempting packets of poppets, there was nothing that grabbed my fancy.

doesn’t life often feel like this shelf ?  badly stacked nearly-rans that are slightly too damaged to see full price ? 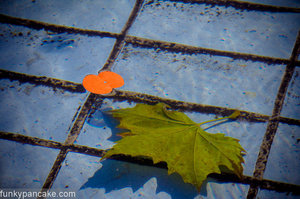 i walked through trafalgar square a few hours after the remembrance day events, and the fountain contained hundreds of poppy leaves 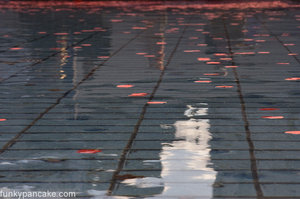 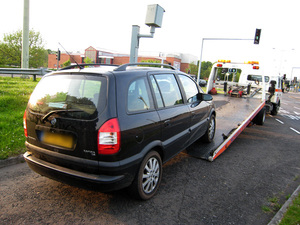 at the risk of turning in to a normal blog, here’s a story from our life.  jane’s car broke down on the way back home yesterday and i drove out to meet them so she and the girls could go home in my car.  before they went we i walked up to a nearby garage and got some food to eat whilst i was waiting.  unfortunately i left my sandwich on the counter, which was a shame.

anyway, i sat in the boot for half an hour or so until the breakdown man turned up.  he asked me to open the bonnet and i fiddled about for a few minutes looking for the pully thing, before re-emerging and explaining that i was actually quite rubbish at cars, and would he mind doing it.  he pulled a lever directly in front of where i was sitting and opened the bonnet.

he looked at the car then quickly disconnected battery as he feared the car might set itself on fire !  perhaps sitting in the boot wasn’t the best plan.  the car was loaded on to his van and plopped outside our house where it rests to this day (which is the same day as yesterday since this will be published tomorrow).

so there we go.  an actual story from the funkypancake household.

knowing right from wrong xcan be tricky, but knowing which is your right and which is your left even trickier.
esther came up with this great trick for remembering and we decided to share it with you here in case you need to teach anyone else (particularly school children) how to remember which side is left and which side is right.
esther made this up (at least she claims she did). you start by putting your hands in front of you with your thumbs pointing towards the middle and your first finger pointing in the air, like so. 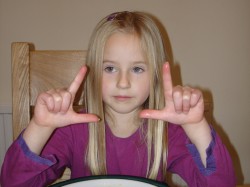 you then look at your own hands and the one which forms an ‘L’ shape is the left hand one. brilliant !

here’s a sign stating the obvious (although you probably already noticed that didn’t you). 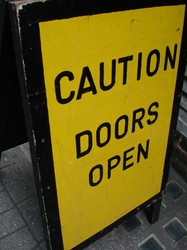 now don’t get me wrong, but do you ever wonder what life would be like if you’d taken another path ? occasionally i consider how worse off i’d be if i hadn’t met my lovely wife jane. i had a glimpse of what a poor predicament i’d be in earlier this week.
we’ve had the decorators and so have been sleeping on our inflatable mattress on the floor in our living room this week. since we have no telly in our bedroom it was quite a novelty watching telly in bed (especially from this funny angle – although i think Michael Stipe’s head always looks like that).
jane’s guitar at the foot of the bed made it appear like a pretty good batchelor pad. however, on reflection, life is most excellent as it is.
and we’ve now moved back upstairs. together. 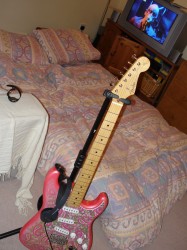 just look at this scene. it’s a proper building site.
it’s got everything you could wish for – men in flourescent jackets, hard hats, ladders, things high up on scaffolding, holes, dirt, shovels, tractors, wheelbarrows.
brilliant. 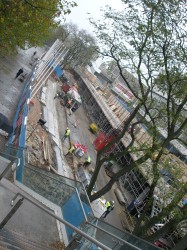 jane bought a new vacuum cleaner yesterday. after years of good labour, our old one converted itself in to a loud dust blowing device.
here is jane with her dyson. she was very pleased. and shocked/excited by the amount of cack it picked up off our carpet. 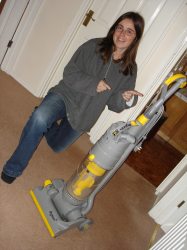 i waited three hours for someone to turn up for a meeting today, but they didn’t show, so by 6pm i gave up and went home. but as i came out the office i saw them in the pub across the road !
so i went in and he admitted he’d forgotten and was very emmbarrased. By the time we’d chatted i was over 2 hours late going home. so the two events which happened on the way home were really someone else’s events which i hyjacked. possibly.
anywoo, the first thing was hearing this phone box ring. in these days of mobile phones it’s rare to hear such thing so i jumped in to answer.
“hello”, “hello”, “who’s this?”, “it’s dave, who this?”, “mandy”, “hello”, “hello”, “where are you?”, “in a phone box”, “where”, “i don’t know, oh yes, there’s a street sign, Paddington Street”, “oh”, “why?”,”because someone just phoned me from there”, “oh, sorry, wasn’t me”, “oh, it was probably my sister”, “yes, probably”, “is she there”, “no, there’s no one in here but me”, “what about outside. she’s got very short hair. and she’s called Karen”, “just a minute, i’ll have a look”, “thanks”, “THERE’S A PHONE CALLED FOR A SHORT HAIRED LADY CALLED KAREN ? no, sorry, just shouted down the street, no one’s about”, “ok, well, thanks anyway”, “that’s ok”, “have a good evening”, “yes, and you”, “bye”, “bye”. 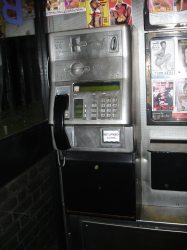 and then a little later on my journey i found this very smart (and expensive) 4 Megapixel camera. i’ve reported it to the relevant authorities and now need to wait until the owner claims it.
i’m going to take a photo of me, the finder, with it so when it gets reunited with its owner they’ll have a nice momento. perhaps i’ll give them a link to the site too. there weren’t any photos on the camera already. I’ll let you know how i get on: 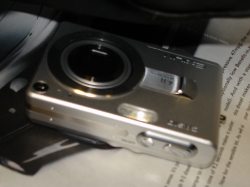 i walk past the gates of the Wallace Collection every day but it’s never normally this exciting.
i suspect they’ve either had a fancy corporate event or a fancy private event. Or maybe they had an opening preview for their new collection which starts tomorrow (according to their website).
but i wish it was just completely for no reason. how fantastic it would be if everyone just decorated their front gates for no reason.
so that’s my challenge to you today. find and put up a fancy decoration on your house/flat/caravan front or on your desk at work.
when someone asks you what you are celebrating, just say “life itself” and do a little twirl. 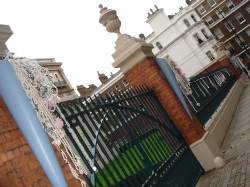 what i want to be when i grow up

this little match box is looking at this pillar in awe.
“Wow ! to be so tall !” they are thinking and they’ve even taken the roof off their box so they can all see properly.
but don’t despair little matches. each of you have the power of fire. something this yellow pretender will never have. 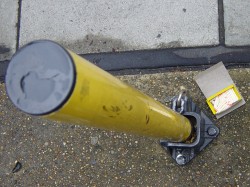 blocked by a wheely

one day on our holiday we found this wheely bin blocking our exit. jane’s dad tried to move it but it was filled with concrete and mud.
how like life. 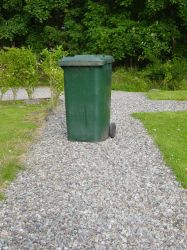 today was a nice day to pass stonehenge. i know people like to see them so here’s some pictures through the car window as we zoomed by.
the one on the right shows esther hiding under kezia’s blanket with stonehenge in the distance. 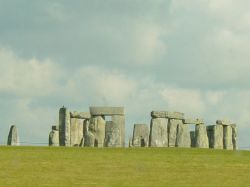 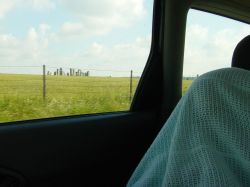 i’m not going to talk about politics. but this was an interesting coincidence in the street.
the middle of the paper had blown away leaving a mixture of headlines from the front and back of the paper. 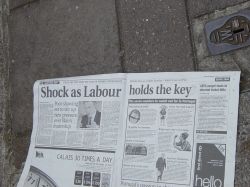 i thought this was poignant (pungent) for the beginning of a new week. a flower about to spring in to life. 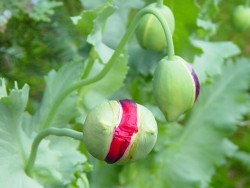 instructions for viewing are in the comments here thanks to Jimmy.
let me know how you get on ! i wasn’t particularly successful. 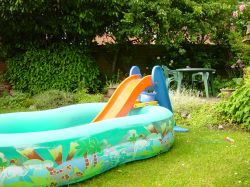 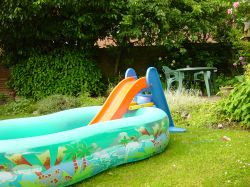 disclaimer: i can’t be held responsible for any blindness or insanity which may result from this experiment.

classic british birthday BBQ this evening for jane’s friend lynn. Untypically the food was excellent. here is the birthday girl and her cake (and husband and mother-in-law).
I took a few other photos with the flash which turned out better technically, but this one captured the mood more accurately. 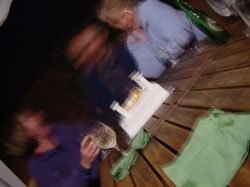 our telly died again so i got the old PC out and set it up in the living room. i think the scruffy office look works well in this room.
jane is less keen.
it’s bagpuss on the telly in case you can’t see it clearly 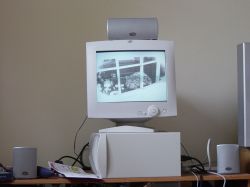 i’m ill today. achy, massive headache, hurty neck, voice like barry white. so i’m taking a rare sick day and spending it in bed. it’s been brewing for a week so hopefully this is the climax of the movement. apologies for the lack of updates today.
UPDATE: thanks to my old friend coproxamol i’m feeling a little better and can at least think again. back to work tomorrow …