the worst rummikub hand ever ?

our lovely friends clive, heather and elaine came round yesterday for sunday lunch.  later in the afternoon clive and heather played rummikub with esther and me.

to start in rummikub you need to make groups or runs of 30 points from the tiles in your hand.  heather was having trouble getting to the 30 and as the game went on it was clear she had a bad hand.  it was only when there were only two more tiles on the table to pick up that we realised quite how bad it was (and at that point i won).

Is this the worst rummikub hand ever ? 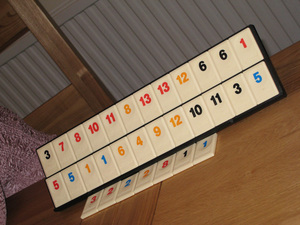