sometimes the idea is better than the final photo

i nearly managed to get a fantastic picture here. the idea was to get the police phone box between the two police men, flanked either side by the two zebra crossing lights.
i even thought i might chance a zoom in to get their helmeted heads either side of the light at the top of the box.
but … it was raining and very windy, there was a lamppost in the way, i wasn’t sure if you are allowed to take photos of policeman on duty and the policemen themselves kept moving about so it was difficult to line up (and i thought they might turn round).
perhaps more importantly, it was just in front of the US embassy in london, so i thought i’d best not look too suspicious (or i might have been shot by the armed police standing near by)
call me a coward, but some photos i just have to do without ! still, you get the idea 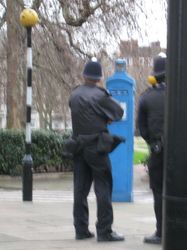