and the view’s so nice

did you ever wonder how the famous piece of london ‘graffiti’ on Primrose Hill got there ? here’s the exclusive !
i took a picture of it almost exactly a year ago when i went for a lunchtime walk.
i had an email earlier today from the artist who created it. she’s never told anyone this story before and was happy for me to publish it. So we’ve got a funkypancake scoop – thanks Angela ! 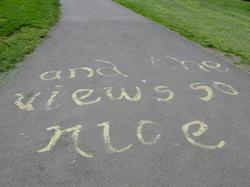 It’s really not that exciting…I’ve been a big blur fan of old (though I gave up when Graham left the band). Somehow as an Australian living in the UK for a number of years I found myself in a bedsit in Primrose Hill (as you do). My then boyfriend and I had just painted the kitchen cupboards in gloss yellow and decided one drunken night to get creative on the hill.
So champagne bottle in hand, we stole up the path, in the dark, just before bonfire night. This meant that there was lots of equipment around for the firework display as well as plenty of bizzies cruising (oops, some Scouse slipped out – I moved to Toxteth from Primrose Hill). So Tony, the then boyfriend, was acting as scout as I got busy with the paintbrush (the little love heart over the ‘i’ was for him… I was quite soppy for him in those days).
It took quite a while as I’m sure you can imagine, and Tony was much more interested in watching the paint dry than doing his job of scouting, so when we turned around on completion of the job we were surprised and obviously a bit freaked out to see a panda car all of 50meters away. Fortunately, we managed to hide the paint tin and brush and look like a young couple on a midnight stroll. The police drove right over it and you can still seetheir tyre tracks going up the hill.
Many an occasion after that I would spend sitting on the hill watching people stop to read the sign or take a photo. I left London early in 2002, and the UK late in 2003 and was told by friends that the council had finally succeeded in covering it over. But then, by chance, an old colleague who has just gone over to work in London tells me that not only is it still there, but people have been touching it up to keep the spirit alive. Joy! Power to the people!
So I googled ‘primrose hill’ and ‘the view’s so nice’ and got your website (along with a few others, though yours was the most popular). And as it was the first time I’d seen it on the internet since I created it all those years ago it fair made my day. So thank you!
Oh and I might add that it was mentioned in an interview with Damon in Q magazine, August… I think 2001. He says how he and Graham were strolling along the park, debating whether the band should stay together or not, and then ‘there’s this huge grafitti. If that isn’t a sign that we should keep making music together, I don’t know what is’. Not many people can claim to have gone to such lengths to keep their favourite band together! (unsuccessfully as it turned out).
So as I said, not that interesting, but definitely a cheerful turn to my afternoon. Next on the agenda is convincing Camden Council to give me a grant for restoration (including return airfare from Melbourne to London, obviously).
Hmmm… Thanks funkypancake Dave for listening; you’re the first person that I’ve ‘come out’ to.

4 thoughts on “and the view’s so nice”