another interesting puddle puzzle. i think it’s a person spraying a can of coke all over the place. but i could be wrong. 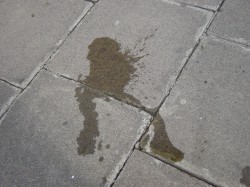 meanwhile, i had a dream last night that a photo of mine had been published in the Independent newspaper (the full size version, not the new tabloid one). i took a note in my sleeping brain to try to remember what the picture was so my waking brain would know.
the picture was of a red car (from left) with a pile of scrapped cars (various colours) in the middle distance behind it. the pile was about 4 or 5 cars high at its peak. to the right of the picture was a big hedge and in the hedge at the front was an owl. the owl had its wings open like it was flying (but in fact it was dead).
therapy time over. goodbye.