BBQ on an island

there’s nothing better than a nice barbeque in this barmy british weather. britain (unlike any man) is an island. so it’s ideal to have your BBQ on an island.
these people chose a traffic island in trafalgar square for their barbeque. i would have spent a bit longer trying to get a nice angle so you could have seen the square behind them, but i was on my way for a meeting with some MPs and probably would have been late. 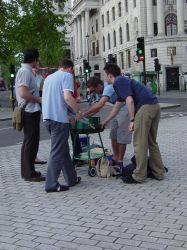