blood views instead of good news

as i mentioned earlier, i went to see the Passion of The Christ last night. I didn’t think it was much good actually. but that’s my opinion.
the music in the cinema was funky, the seats were comfy and the refreshments were plentyful. there was an advert for ‘paradise poker’ before the film which was a nice touch
here’s me with my flagon of coke giving a nice ‘post passion’ wave: 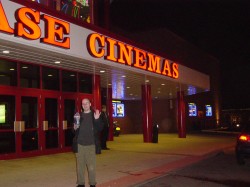 but what did i really think ? here’s my review for those who like to read words:

So, have you seen The Passion of the Christ yet ? I went on Sunday night and sat with a load of church-skivers in an uncrowded cinema.
Plot summary: an apparently innocent man gets executed in a most unpleasant way.
The unanswered question throughout is ‘why?’
The film is essentially a study of Roman execution. The violence is extreme and from about 20 minutes in I felt sick from too much cola and chocolate.
But let’s compare the film to the true story of Jesus as revealed in the Bible. The Bible gives us God’s account of the life of Jesus and puts it in a wider context.
The Bible’s starting point is that no one deserves a relationship with God because we have all failed to live up to his perfect standards.
As a result God became a real human being, born as a baby. He grew up, taught and was eventually executed as a criminal (despite his innocence).
He, the only perfect man to have walked the earth, took our badness and died on our behalf. He came back to life after three days so overcoming death.
Death wasn’t the end for him and as a result it doesn’t have to be for us.
There’s much made of the baseless trials at the beginning of the film, but
the real injustice in the film is that we can leave the cinema with the smug satisfaction that we had nothing to do with this execution.
At worst the film suggests that Jesus died for nothing and no-one.
The truth is he died for everyone who was, is and ever shall be alive, including you and me.
Yes, he suffered a hideous execution, but the glorious hope for all people is that Jesus took all our badness on to himself when he died so that we don’t have to be punished ourselves. If we accept this then we become free and life really is worth living.
Sadly the film focused on the blood views rather than the good news.
So ultimately, who is the cross really for ? Jesus ? us ? or God himself ?
Through Jesus’ death on the cross we can have a direct relationship with God.
It’s God who wants to take the highest fame. On the cross He holds together His immeasurable love for us and His infinite justice.
how scarily fantastic is that !
here are some links worth looking at:
review from the BBC website
why did he die ? (follow up site by some christians)