jane’s now fully in to her exam-marking season which means 4 or 5 weekends of daddy/daughter weekends as we get ourselves out of the house so she can work.  yesterday we went to the wood festival which was a great eco-hippy fest of the best degree 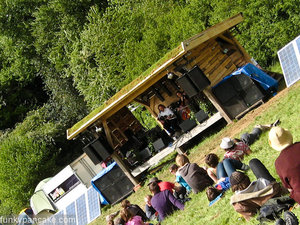 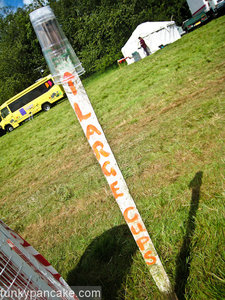 there were all sorts of sensible eco-friendly things like this stick for putting (used) large cups on.  they also had eco toilets which involved a sprinkle of sawdust rather than a flush.  the girls thought they were yucky but quiet (if you didn’t listen to the sound of ‘things’ dropping on to the pits below) 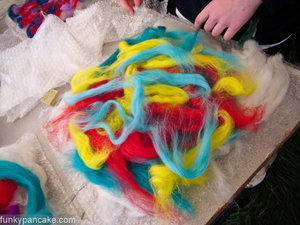 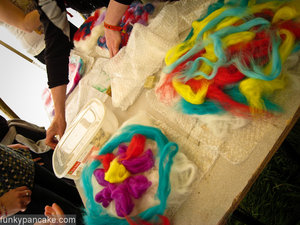 the girls did some felting, which was interesting.  this wool comes from merino sheep and was lovely 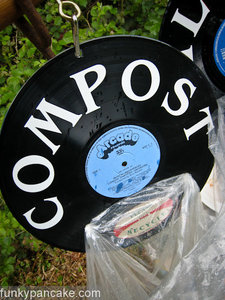 here are a few old records used for recycling, which summed up the festival quite nicely i think 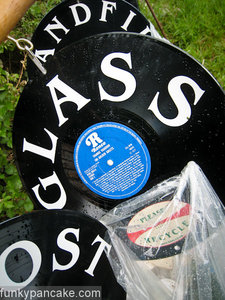 there was a guided tour to go forraging in the local woods in the afternoon encouraging people to go and find their own dinner in the woods.  the girls didn’t fancy that much so we went crocheting instead.  here’s my effort which is basically a load of knots as far as i can see.  the girls’ efforts were much better than mine 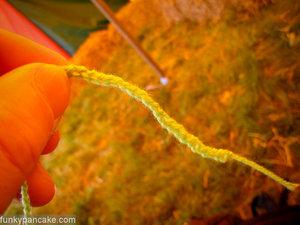 so that was our girls’ first introduction to a festival.  a good choice for a first experience i think as it was nice and small and friendly.  and just the right distance for a day trip.