stuck in the mud 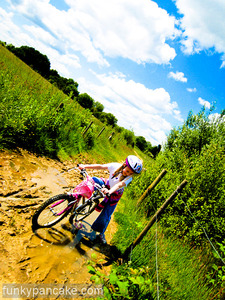 i took the girls on a bike ride yesterday to the local village post office where we saw a famous person who lives locally.  he laughed at me (in the nicest possible way) for having my bike hat on backwards.  oops.   we went on a more elaborate way back and had to cross this slippery mud pit, which esther managed to get stuck in.

later on i took esther to watch the indiana jones film.  indy wouldn’t have got stuck in a muddle puddle i expect.