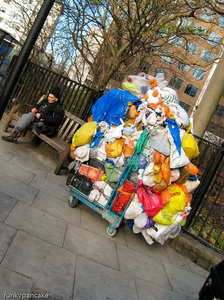 even street ambassadors (tramps) need hobbies.  there’s at least two in london who make a habit of collecting huge amounts of carrier bags full of stuff and transporting them round london in trollies.  it could actually the same chap come to think about it – perhaps he’s had a shave and removed all the white paint from his coat.

anyway, quite poignant i think.  chap with nothing (we assume) dragging all his found belongings round town in a cumbersome and visually striking way.