how’s this for a celebrity spot ? it’s sue pollard. we saw her in the audience at the blue peter proms. 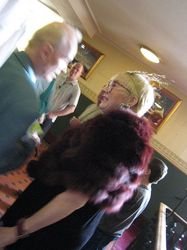 esther said she liked her hair and she thought she was called Sue Bollard which would have been much better.
if only i’d known she’d been one of the voice of Noisy in Little Robots, i could have appeared more knowledgeable and down with the kids