esther had a concert yesterday where she sang and played her recorder. it was in a proper theatre and everything. 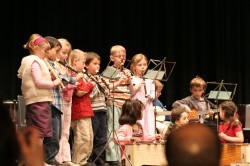 kezia loved watching her older sister and afterwards said “well done Esther, you did well and you did exactly what you had to do”. i think that’s quite a good compliment coming from a 4 year old.
when the children weren’t performing they had to sit on the stage. i noticed two children (a boy and girl) at the back punching each other and having a proper fight which was quite interesting. Meanwhile, the older ones practiced balancing their recorders on their ends which regularly resulted in clonks during other people’s performances. 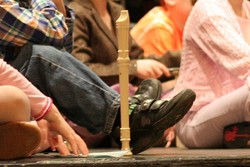 esther was not involved in either of these misdemeanors