it was hot this evening so i walked back from a work event in Westminster to Paddington Station. Unfortunately it took ages to cross Hyde Park as they’ve built a concert venue all over it.
today loads of great bands had been playing as part of the Wireless Festival. I went by around 9pm and Keene were about to play. i’m not too keen on them (clever ey?) but i do love the Secret Machines who were also playing. i would also liked to have seen Supergrass and the Bunnymen.
but this was all academic as i didn’t go in. But i did walk past this spot on the perimeter where people were sitting watching the big screens on the side of the stage ! 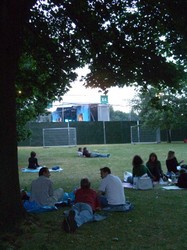