on the right track

this is jane’s old toy train set. i had exactly the same train set when i was a lad so it’s nostaligic for both of us, but it lives at jane’s parents so we don’t see it much.
we borrowed it for kezia’s party last week so kids who didn’t want to play the party games could amuse themselves.
it kept me amused, especially when i discovered that jane kept the track and trains in seperate boxes. i suspect they used to be all kept in the same box until the toy railways were privatised and the ownership of the rolling stock and track were seperated. 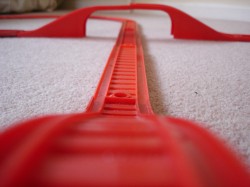