the misery of commuting

my train company changed the timings of all its trains this week. they did it so they could ‘have more seat and better punctionality’.
so far, nearly every train i’ve been on had been late and has been full to bursting with people standing.
but my new 6.08am train seems quite good, even if it does mean i have to get up an hour earlier.
so how can such a company ever make it up to their customers ? answer: by giving them a mince pie.
i had a suspicion they were poisoned so they could kill off a few commuters and free up some seats. 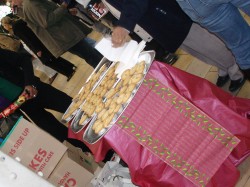