a colleague of mine found these photos and an intriguing letter in her loft. the photos were found in opposite loft spaces and the letter was attached to one of them.
they are not added to main collection as they weren’t really found in public. they have instead been returned to the loft space where they will lie in darkness. the loft becomes a fossil to the previous inhabitants. 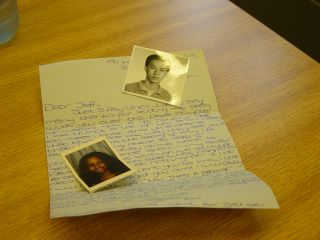 when she moves out of the house she has promised to add her own photo to the pile to keep the tradition rolling.